ABC TO SEND IT'S ACE HOLLYWOOD CELEBRITY REPORTER TO COVER OUR THURMONT LUNCHEON!

Well, that's ALMOST true. As you know ABC's ace Hollywood and entertainment reporter is Bill Diehl. That's right, WTOP's own Bill Diehl, who (it seems) just yesterday was sitting behind his desk in the corner of the 5th floor newsroom at Broadcast House. 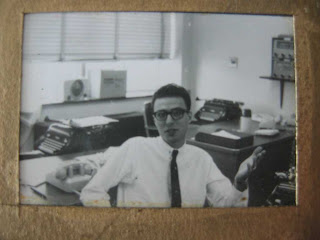 Actually, ABC is not SENDING Bill down to Thurmont, he's thinking about "sending" himself.
The "soft spot" in Bill's heart for his old station and it's people has obviously never left him. I hear from him two or three times a year asking about us and commenting on some of this website's postings.

I sent a picture of me from my WTOP days...only still shot I have, although someone did a
video tape of one of my TV newscasts...I anchored the 9:55 AM "Mid Morning News,"
right after "Ranger Hal." (Black and white--we wern't doing color casts back then...in fact
I don't think anyone was...that kind of stuff only started fairly recently, even in New York.
Anyway my newscast was done on 2 inch video---we had one of those monster Ampex machines as you'll recall at TOP and someone was kind enough to tape a cast I did...Jamie Bragg (now the late Bragg) did the opening.
I had it transferred to VHS and now it's on a DVD...what another time...back then I talked on the cast
about 'negroes rioting.'
Hope you're well...I'm still at ABC despite the Citadel buy of the ABC o & o stations.

My wife Lorraine is working on her fourth book "New York During WWII," due out in 2009.
We have two grandchildren now, Teddy who is 3 and a half and Lyla, the newest, she's about 7 months.
Our child psychologist daughter Suzanne (our only child) lives in Needham, Mass with her husband,
a lawyer. Suzanne turned 35 this year...boy does time fly.
I noted that you guys are having another gathering thanks to Doris in October, the 16th I believe,
and in the back of my mind I kinda thought it might be fun to come down for that...hey at $12 a head
the price is right! We'll see how things are going back here in NY and at ABC. By the way, where
the hell is Thurmont, Md., as it relates to Washington? Any place to stay there?

All the best,
Bill

We sure hope you can make it Bill! If you have a couple of days to spare, you could certainly do worse than spending them in Thurmont....taking in the beautiful Fall scenery and GREAT food like the COZY INN serves up every day. -Lee