"Our" Most Famous Daughter 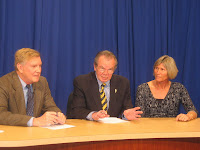 1972 was the year that our own Buddy Belote's 15 year old daughter Melissa won 3 Olympic Gold Medals in swimming. She was one of the youngest athletes to ever compete in the Olympics.

She became a national celebrity that year and was honored all over the country, including the White House.
Chuck Langdon and I had the pleasure of interviewing her on Fairfax Cable's OUT OF THE PAST show.
See the entire interview HERE
(Sorry about those annoying commercials (graphics at the bottom of the screen) but all of us understand how that works. Without them, WTOP could never have paid us those enormous salaries for all those years.)
Posted by Lee Shephard at 12:50 PM