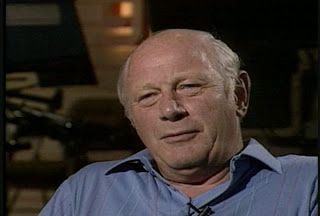 It is with great sadness that I inform you of the passing of Jack Waldron. I beleive there are still a few members of the 9 news team that may recall his time at the station.

Jack retired as a Channel 9 News Technical Supervisor 20 years ago. He had been an employee of the station for 42 years. Jack started with, then WOIC, in 1949. He interviewed for the position from a phone booth at the construction site of the Channel 9 building. He was one of the original dozen or so employees.

Jack worked in the infancy of television news with the likes of Walter Cronkite. As a camera man, he met and filmed many interesting people, including many pool side events with Aurthur Godfrey. He also used his camera skills on the roof of Griffith Stadium during Redskin games.

Jack was very proud of his work and the people he worked with. It was always a treat to have him invite us down to meet the talent. I remember in particular meeting my favorite sportscaster, Glenn Brenner, in the late 1980's.

Before Jack retired, he was honored with the Silver Circle Award for 40 years in broadcast television. After retirement, he was active with the alumni association. Over the last decade, Jack had lost touch with most alumni due to health concerns. He often mentioned Buddy Belote. Please forward this email to him and anyone else who may be interested.

Jack was born and raised in Washington, DC. He worked at his father's print shop until entering WWII in 1943. Jack was a decorated member of a B17 crew as a radio operator and a gunner. He flew 35 bombing missions aboard "Lucky Penny I, II, and III". He was shot down and MIA in LPI and crash landed in LP2, and yet like most of his generation, he fought until the mission was accomplished.

After the war, Jack worked briefly for RCA before interviewing for his job at Channel 9. He married his wife, Betsy, in 1947 and they raised 2 beautiful daughters, Diana and Pam.

Jack was an avid golfer. He practiced hard and, at a 2 handicap, had a room full of trophies. Among the trophies are ones from the WTOP Golf Classic.

Jack passed at exactly 11PM On December 8TH. Just in time for the news and with his family by his side.