Dear all --
If you were listening to the tail-end of "Gunsmoke" on Ed Walker's March 13
show, you might have heard a teaser that would have rung a responsive chord
to people living around DC. Staff announcer Roy Rowan invited listeners to
stay tuned for "Eddie Gallaher and the Main Street Music Hall".
Do any of you know anything about this show/series?

Reply from our in house historian and all around good guy,

CBS hoped that Eddie Gallaher was another Arthur Godfrey with a nationwide star potential, so they gave him a trial run on the entire network originating from New York during the summer of 1952. "Main Street Music Hall" was just one of the CBS network shows that Eddie hosted during his network shift. 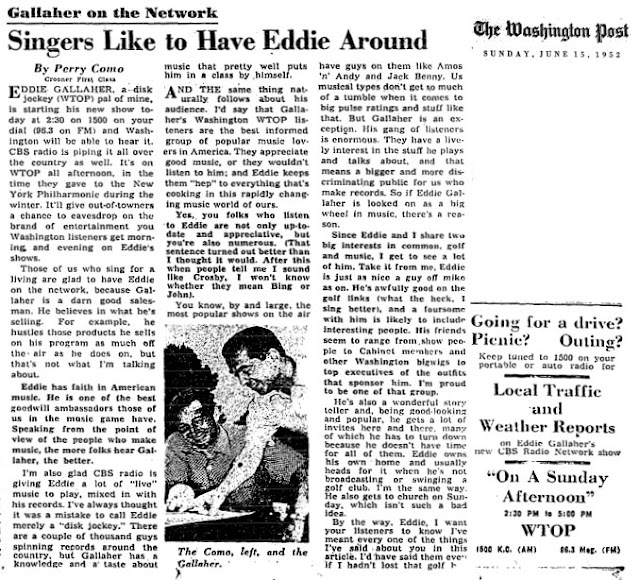 So, I looked-up the radio listings in the Washington Post for July 12th, 1952.

Eddie is shown as the host of his usual Moondial program starting at 11:30pm, but there is no sign of "Main Street Music Hall" in Saturday July 12th's listings.

However, I looked at the following day's listings; Sunday July 13th, 1952 and found Eddie as host of "Main Street Music" on that day.


CBS even tried Eddie as a substitute host for a prime time TV quiz show:

Regardless, as we all know, Eddie stayed "local" to DC (and occasionally Baltimore) for his entire career.