These images are a bit fuzzy, but interesting.  They are courtesy of Bill Diehl....who got them from Cory Haber a retired NBC engineer.

After his WTOP-TV days, Klavan went on to become an institution in New York radio. 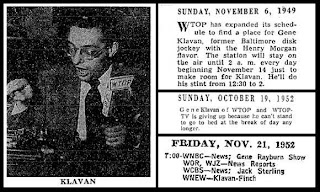 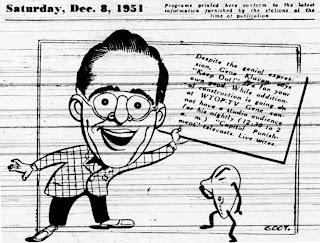 Gene Klavan, who first as half of the radio show "Klavan and Finch" and then as a solo performer, brought slicing wit, a knack for voices and peppery irreverence to New York morning radio audiences for 25 years, died yesterday at New York-Presbyterian Hospital in Manhattan. He was 79 and lived in Manhattan. The cause was complications of multiple myeloma, his son Ross said.

From 1952 to 1968, Mr. Klavan was the comic half of Klavan and Finch, heard on WNEW, then one of the leading AM radio stations in New York. With Dee Finch as straight man, Mr. Klavan changed into the voices of wacky characters like Trevor Traffic, Mr. Nat, Sy Kology, Victor Verse and Emilio Percolator. The sound of a slamming door signaled a character's arrival.

Mr. Klavan's shows were an integral part of the personality of a station known for its polish and for standards by America's great songwriters. He, however, became famous for zaniness and a comic irreverence that sometimes extended even to his sponsors.

His success as a pioneer shock jock, tame by today's standards, was suggested by an article in The New York Times in 1971 that reported that a third of that 24-hour station's revenues were generated by his four-hour show. When he threatened to fire the fictional Trevor, the station was deluged with calls. "Music was secondary," he said in an interview with The Times in 1983, referring to his show. "It was all ad lib."
Eugene Kantor Klavan was born in Baltimore on May 4, 1924. He attended Johns Hopkins University, but quit to enlist in the Army. He served in the Pacific during World War II and later was an entertainer for the military.

He began his radio career in Baltimore and Washington, but came to New York on the strength of an offer from Channel 11. A friend intercepted him and told him that WNEW's highly successful radio team of Rayburn and Finch was breaking up after five good years. Gene Rayburn was going to NBC. Mr. Klavan auditioned for the job on the theory, he told The Times in 1971, that "if I died up here on TV, I was really dead; on the other hand, if I died on New York radio, nobody'd be the wiser."

Finch retired in 1968 and Mr. Klavan continued the show alone as "Klavan in the Morning." In 1977 he moved to WOR-AM and left radio in 1980. Mr. Finch died in 1983.
Mr. Klavan later worked as a host for the American Movie Classics cable television channel, as a columnist for Newsday, a comic commentator for WCBS-TV and a semiprofessional photographer. He wrote two books, one on his years with WNEW and one on the news media.

In addition to his son Ross, who lives in Manhattan, Mr. Klavan is survived by his wife of 57 years, Phyllis; his sons Scott and Laurence, of Manhattan, and Andrew of Santa Barbara; his brother, Bennett, of Chicago; and three grandchildren.
Posted by Lee Shephard at 4:13 PM