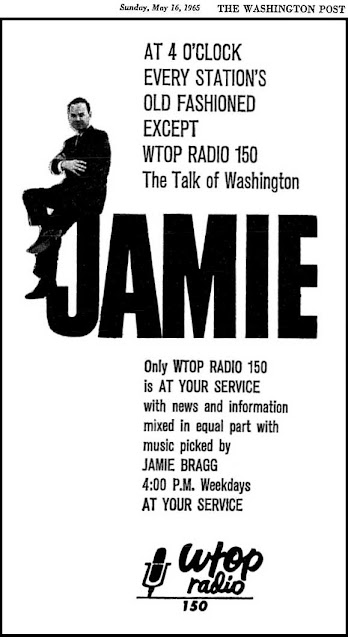 Thanks to our friend, Bob Bell for finding that ad for us.


About a year after that, on the TV side of Broadcast House was when "Cadence" began.  Here's a story I wrote about that:

I think I had one of the greatest jobs in the world. From 1966 til 1969 I hosted a local TV show in Washington, DC that allowed me to interview almost every celebrity who showed up in this town during that time. 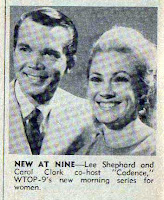 But it still was a job. Not only did I have to try and ask reasonably intelligent questions of my guests and hope that their answers were good enough to keep the audience interested, but I was in charge of lining up and booking the guests as well.

In an era in which everybody was obsessed with “getting on TV,” you would think that was the easiest part of the job.  Nope.

Next to getting enough interesting and entertaining guests to fill all those shows, weeding out the uninteresting and boring hoards who were constantly pestering me to get on the show, was the next hardest part of my job. Friends and even co-workers would lobby me on behalf of a friend or relative who would make a “fantastic interview..”

It was very hard for me to say “no” to these people. I tried to avoid some of the more persistent ones, but that wasn't always possible.. One of those, for example, was Margaret Runyon. She was the switchboard operator who sat only a few feet from the entrance to the lobby of the station directly in the path of everyone who entered the building.

Margaret wanted me to interview her ex husband, with whom she was still friendly and who she said was a very good writer; even though some people thought his poems were a little strange.

So hardly a day went by when Margaret didn't bring up Carlos, that was his name, and how his writing career was going.

She was good hearted and sincere and I hated to keep saying “no,” but I knew that I had to keep the level of guests up to the highest standard possible. I needed people who were nationally known and who would give my audience a reason to tune it.

But there was no way of avoiding Margaret (unless I entered the station through the window) so I had to keep telling her that the show wasn't going to survive very long if I started featuring unknown writers of strange poetry and so forth.

I guess the message finally got through because she stopped mentioning her ex to me.

Then, one morning about a month later I arrived at the station and greeted Margaret and the other switchboard operator and as I passed by the reception area she removed her headphones, turned to me and announced that someone had written an article about Carlos.

Yep, there it was: 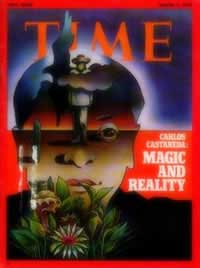 
“The most mysterious man in America: 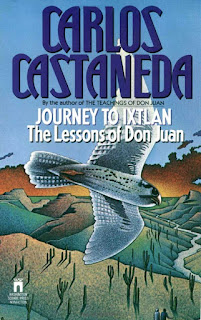 That picture of Carlos with his hand over his face could well have been taken of me at that moment.  Only, I wasn't trying to be mysterious.

(NOTE: Now the punchline of this story may fall flat on those who either were not around or who did their best to ignore the popular culture of the 1960's. I would have been a cheerleader for the latter except that I was in the Television business, which was a major player in those theatrics.)

“Carlos Castaneda was an author and anthropologist born in Cajamarca, Peru in 1925. He burst onto the scene with a popular book about entheogens (drugs used in spiritual ceremonies) and the magical world-view as reality in the middle of a time of academic and cultural upheaval.

His stories of a wizened old sorcerer, a man who came from a long line of peyote and mushroom-using wise men with extraordinary powers, captured the imaginations of students, hippies, and scholars. His original book is presented as a "UCLA PhD Anthropology Thesis", but it was a highly radical, postmodern piece of anthropological 'field work'. Castaneda's work was a watershed for critique and thought by cultural anthropologists and brought many new, excited minds into the field.

There is a cult of personality that is associated with Castaneda; he is sometimes called the godfather of the New Age movement. -Wikipedia”

(PS-During his early days of "fame" Carlos cultivated the "mystery" about who he really was. Heeding Margaret's advice, he avoided being photographed  lest, she argued, that people discovered that the  "purveyor of the new mysticism was a guy who looked like a Cuban bellhop."   -Ed)
Posted by Lee Shephard at 8:22 AM