I thought you'd like to see this article that appeared in the Warren Couinty Report in early May of this year, right after the death of the legendary Dick Clark  -Lee


“I think we were both proud of the opportunity to be there on the radio, remember television was
just starting as of 1947-48, and it wetted our appetite for broadcasting.” – Don Richards on his
and fellow 1951 Syracuse graduate Dick Clark’s work on SU’s campus radio station 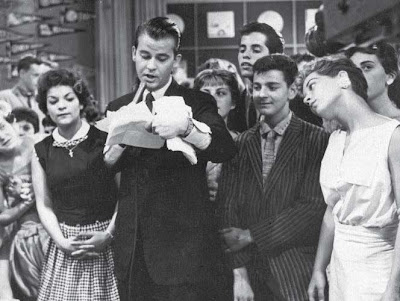 The April 18 passing of Dick Clark
recalled not only an exceptionally
long broadcasting career, but much
more.
Clark’s 1954 move from a broadcasting
novice’s spot as a commercial
“station break” announcer for a local
Philadelphia radio/TV ABC affiliate
into an emergency replacement
spot as host of a local afternoon teen
dance show was more than a fortuitous
professional moment.
Months after the 24-year-old Syracuse
University graduate solidified
his position as host of a show catering
to local kids not all that much

younger than himself he had two
ideas in rapid succession. They were
ideas that both reflected the times
and times that were on a horizon –
the 1960’s explosion of youth culture
and the racial integration of not only
that culture, but American society as
a whole as the 1950s moved toward
the tumultuous 1960s.
On April 19, the day after the 82-
year-old Clark succumbed to a massive
heart attack following a medical
procedure, and eight years after
suffering a serious stroke, Warren
County resident Don Richards shared
some personal memories of his and
Clark’s breaks into broadcasting following
their 1951 graduation from
Syracuse.
Richards and Clark met as undergraduates
working for the campus

radio station.
“I think we were both proud of the
opportunity to be there on the radio,
remember television was just starting
as of 1947-48, and it wetted our
appetite for broadcasting,” Richards
said.


… Boy, what memories … All in all,
I vicariously enjoyed the trip back for
our 60th reunion through your eyes.
I can’t believe you went to all the
trouble you did. I most appreciate all
your efforts. Thanks, once again, for
your kindness.”
And so ended a final trip down
memory lane for two Syracuse alumni,
both of whom made their respective
marks in broadcast journalism as
the era of television was just beginning
to usurp radio as the standard
of mass communications at the mid point of the 20th
century.  -RB
Posted by Lee Shephard at 10:22 AM