There is no doubt that Jim Silman was one of the finest and most effective executives in early TV history. As program director of WTOP-TV throughout the 1960's, Jim was responsible for many of the creative innovations that helped the Washington Post's station to reach it's lofty number one position throughout most of that decade.

He was known nationally for his work with the National Football League, directing weekly games for the network.  Many of the visual innovations that Silman created for those early games are still in use today.

Silman concluded his long TV career as a director/ executive with the United States Information Agency.

Since retiring, if it can be called that, he has written a couple of symphonies and several books.  The latest is titled F Sharp 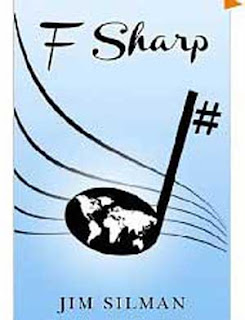 . . . when the curtain parts on any stage in the world and music fills the air, it is, indeed, an international performance. Why? Because an F SHARP in Lithuania is an F SHARP in America, and throughout the world where music, as we know it, is played.
To further the universality of music, producer/director, Jim Shaheen, envisions a televised symphony concert with orchestra sections scattered across the globe, playing the same selection in sync while appearing to the television audience to be on the same stage! He convinces CBS to take on his daring plan but encounters malicious attempts by someone to destroy the show. Who?
Jim, and technical genius, Sam MacNoonan, face the mystery’s dramatic and suspenseful moments until the last note of the concert is heard throughout the world. Famed Russian maestro, Igor Ozolevsky, comes to their rescue and his daughter, Sophia, brings a love to Jim’s life that equals his desire for a successful show.
In F SHARP, you experience their determined efforts to air the improbable program, and the dramatic inner workings of a television control room during the crisis-laden broadcast. Cool heads are a must. The author knows, he’s been there.

Silman's book is available at Amazon.Com
Posted by Lee Shephard at 4:09 PM